Growth of ESL classes around the world 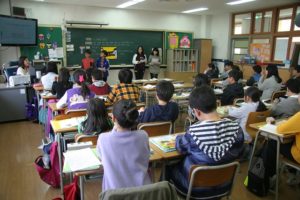 Growth of ESL classes around the world

There’s not a shadow of a doubt about it: the English language teaching industry has experienced massive growth over the past few decades, and it is set to keep growing at an equally impressive rate in decades to come. This shouldn’t come as a surprise, considering the English language has steadily consolidated itself as the most important language for business, education, entertainment, culture and general global communication, and it is estimated that 1.75 billion people worldwide now speak English to some degree. Both large and small English language businesses part of the US$ 63 billion a year ESL industry are growing and it’s believed that 100,000 new English teaching positions open every year.1 In this article we’ll explore the main factors driving the growth of ESL classes around the world and what the future holds for ESL professionals.

An ocean of economic factors driving the growth of ESL classes

Many of the factors behind the growth of global ESL instruction are of an economic nature. Governments are well aware of the fact that the economic potential of their workforce increases if the workers speak English since it enhances access to international trade. This information is by no means on individuals either, translating into people of all ages often making an effort to find the time and resources to study English outside of mainstream education.

One of the fastest growing ESL markets is in China, which is also the country with the largest number of citizens already speaking English as a second language (currently an estimated 300 million2). The sheer size of its population combined with its citizens’ interest in venturing outside of the country’s borders for work and education have created a true boom of English language providers in the country, now growing at a much faster rate than ESL providers in other Asian countries such as South Korea, Japan and Thailand. An interesting trend happening in many Asian countries as well as other developing nations is the tendency to teach English to children at an increasingly young age. Bilingual immersion schools where children start receiving part or all of their education in English from pre-school are on in high demand, and so are websites, apps and virtual classes specifically catering to young learners.3

Additionally, there are now more non-native English speaking students interested in studying abroad, which has greatly increased the amount of people studying for an officially recognised international exam such as IELTS, or a Cambridge exam.

The wave of the digital age is all in English

Another undeniable factor behind the surge in ESL classes is the expansion of the Internet over the last 10 to 15 years. A recent study has stated that 51.2% of the world’s top 10 million websites are in English, towering over the next language in the list, Russian, coming in at a mere 6.8%.1 This is a crucial bit of information that explains part of people’s motivation to learn English, since so much digital information is only available in English. It gets even more interesting, though, when you bring in the forecasts of the “rising billions”, the name coined to refer to the people who aren’t yet active Internet users, but will get online within the next 10 to 15 years. This group of people is estimated to be somewhere between 1 to 2 billion people, and the expectation is that many of them will want to learn English as soon as they realise it’s necessary to get the most out of the information available online. In addition, the growth of both Internet penetration and developments in virtual learning have created a flood of online ESL classes, where both teachers and students make use of the benefits that teaching and studying online can offer.

This expansion is undoubtedly a very positive thing for current and future ESL professionals. In many countries, the demand for English teachers has been greater than the supply for several years now, and even a junior ESL teacher shouldn’t find it hard to find a job, especially if they’re flexible about their desired teaching location. As the market continues to mature, there is also a growing segment of schools and institutes that will only hire highly experienced ESL teachers, rewarding them with excellent pay packages, thus creating an interesting career track for English teachers. This is without having gone into the vast opportunities for online teaching and curriculum development. In short, ESL teachers, get ready to set sail because the world is your oyster!